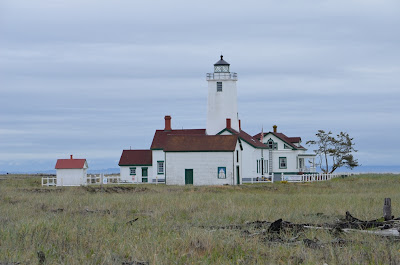 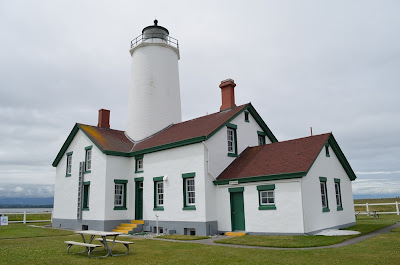 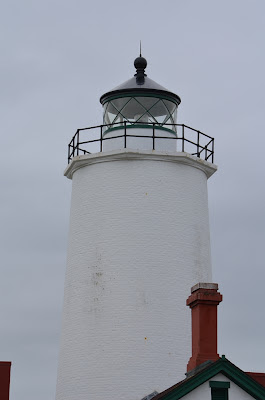 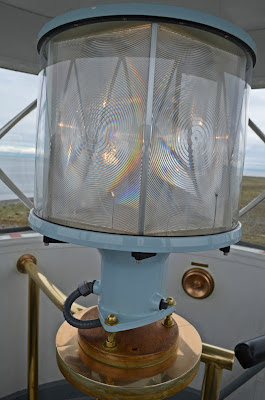 The New Dungeness Light Station is located at the end of the five mile long Dungeness Spit just West of Sequim, Washington on the Strait of Juan de Fuca.  It is accessed only by hiking the spit which is part of the Dungeness National Wildlife Refuge. The light was the first light on the Strait of Juan de Fuca and one of the four earliest lighthouses constructed in Washington. The light was first lit in December 1857. In 1868 eighteen Tsimshian Indian were massacred by S'Klallam Indians on a second spit that juts out from Dungeness. One wounded and pregnant woman survived and made her way to the light station and was protected by the keeper and his wife. In 1976 the Fresnel light was removed and replaced by a rotating bulls eye prism and automated. Since 1994 the New Dungeness Light Station Association has maintained the station and volunteer keepers live at the station for a week at a time, maintaining the grounds and buildings and acting as tour guides for visitors. The station is on the National Register of Historic Places. A visit to the light is well worth the hike.  Photos taken in June 2012.
Posted by Neal at 10:03 PM No comments: 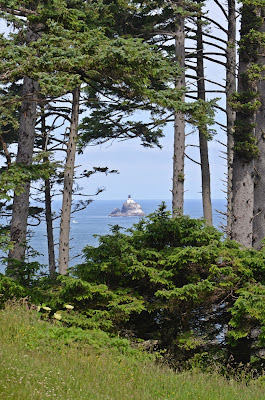 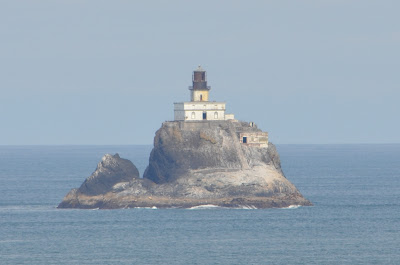 The Tillamook Rock Lighthouse sits atop Tillamook Rock approximately one mile from Ecola State Park, just North of Cannon Beach, Oregon. Construction of the lighthouse commenced in 1879 and took 525 days to build due to the trecherous weather conditions. It was lit for the first time in January 1881. Over the years it became known as "Terrible Tilly" due to the severe weather conditions that the lighthouse and it's keepers had to endure. During a storm in October 1934 a boulder was tossed into the lantern room by the sea and smashed the Fresnel lens.  The light was decomissioned and turned off in 1957 replaced by a whistle bouy one mile further offshore. Since then the lighthouse has changed hands several times, the most recent owners converting it to a columbarium called "The Eternity at Sea Columbarium" however only a small number of ashes have been placed on the rock to date.  Photos taken in June 2012.
Posted by Neal at 9:18 PM 1 comment: 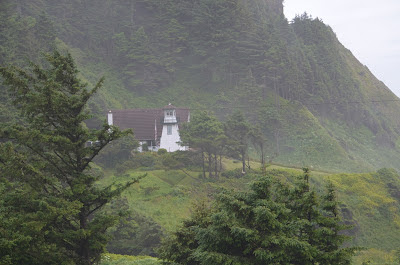 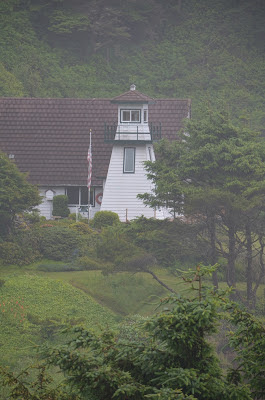 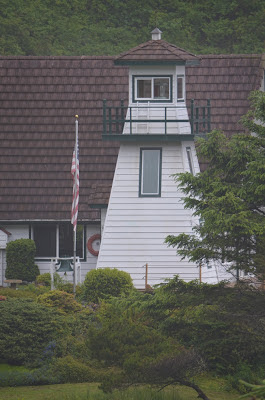 The Cleft of the Rock Lighthouse, also known as Cape Perpetua Lighthouse, is one of two privately owned lighthouses in Oregon that are listed as official aids to navigation. It is located just South of Yachats, Oregon. This lighthouse was built in 1976 by James A. "Jim" Gibbs, a former lighthouse keeper and marine historian. Mr. Gibbs, who passed away in 2010, wrote many maritime books, several about lighthouses. Mr. Gibbs constructed the lighthouse based on the former Fiddle Reef Lighthouse, Oak Bay, British Columbia. The light is a halogen globe that is visible for 16 miles.  The light was obtained from the Canadian Coast Guard. The name, Cleft of Rock, came from a hymn by Fanny J. Crosby - "He Hideth My Soul in the Cleft of the Rock" (Exodus 33:22). Photos taken in June 2012.
Posted by Neal at 7:20 PM 1 comment: 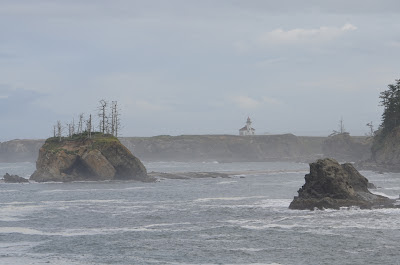 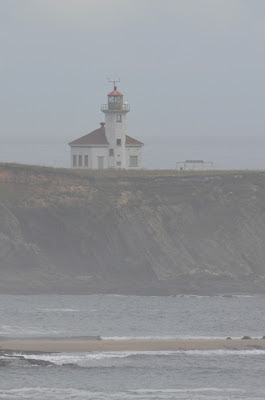 The Cape Arago Light Station was originally established in 1886. The current lighthouse was constructed in 1909 and was deactivated in 2005. In 2008 a bill was passed transferring the title to the land to the Confederated Tribes of the Coos, Lower Umpqua and Siuslaw Indians.  The light is difficult to get close to and my somewhat distant photos were taken in June 2012.
Posted by Neal at 6:42 PM No comments: 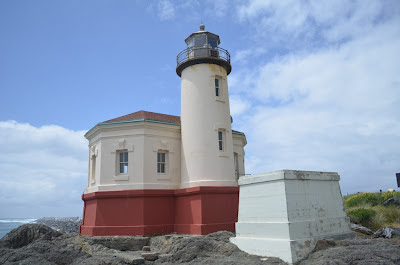 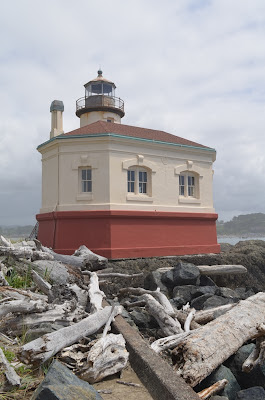 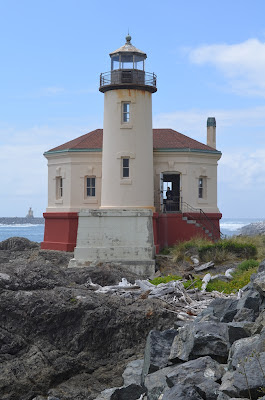 The Coquille River Lighthouse is located on the North side of the Coquille River, across from the town of Bandon, Oregon. It currently sits in Bullard's Beach State Park. Construction of the lighthouse commenced in 1895 and the lamp was first lit in 1896. The light was decomissioned in 1939 and replaced by a fog signal and beacon on the South Jetty in Bandon, across the river. The lighthouse sat abandoned for many years. When the state park was created, it took responsibility for the lighthouse and the building was restored in 1976 and a solar powered light was eventually placed in the tower in 1991.  The building is illuminated with Christmas lights each December. Photos taken in June 2012.
Posted by Neal at 6:13 PM 1 comment: 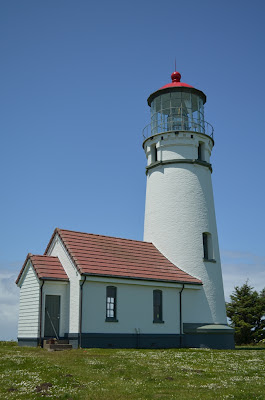 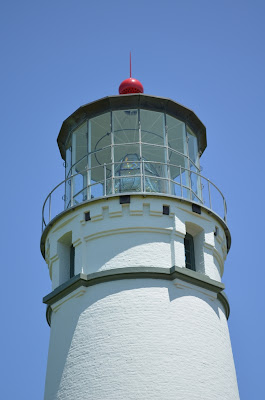 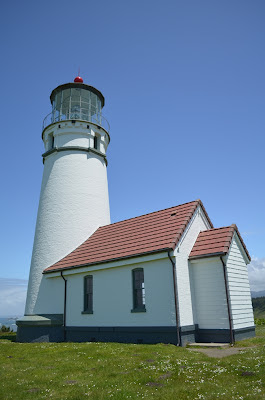 The Cape Blanco Lighthouse is located on a high bluff at Cape Blanco just North of Port Orford, Oregon. The lighthouse commenced operation in December 1870.  It was automated in 1980.  In 1992 vandals damaged the lens, but it was able to be repaired and was back in operation by 1994. The light has been open to visitors since 1996 and is part of Cape Blanco State Park. Photos were taken in June 2012.
Posted by Neal at 5:49 PM No comments: 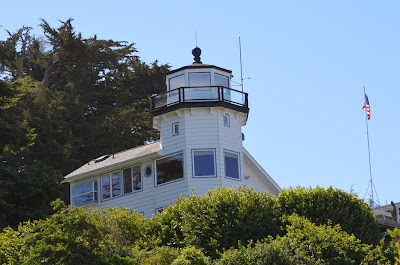 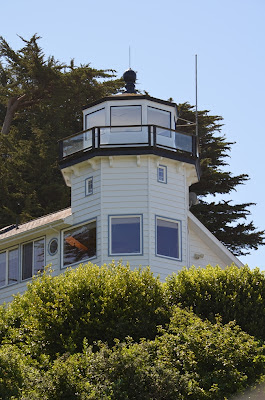 The Pelican Bay Lighthouse is one of two private lighthouses on the Oregon Coast that is recognized as an offical aid to navigation by the Federal Government.  The owner, Mr. Bill Cady originally built the lighthouse as an addition to his house in 1990. The house was moved to its present location above the Port of Brookings (Brookings Harbor) in Brookings, Oregon in 1997. Mr. Cady received permission to light the lantern in 1999 and it was first lit on July 4th, 1999. The lamp is a fixed acrylic Fresnel lens and can be seen from a range of 11 miles. It is lit daily from dusk to dawn. Mr. Cady's father was a former lighthouse keeper in California.  It is the most Southerly light in Oregon. Photos taken in June 2012.
Posted by Neal at 5:28 PM 4 comments: