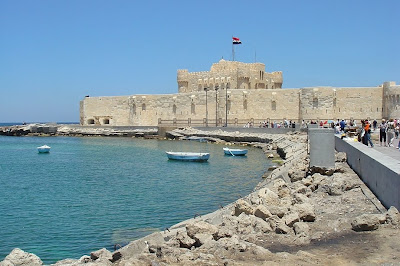 Known as one of the Wonders of the Ancient World the Pharos Lighthouse of Alexandria, Egypt was built in the 3rd Century B.C. on a small island in the harbour at Alexandria. It was estimated to have been between 380 - 490 feet in height, and was considered one of the first lighthouses in the world. The structure was destroyed in the 1300's A.D. The photo is of Fort Qaitbey which sits on what is believed to be the original site of the Pharos Lighthouse, and it is believed that some of the original stonework from the Pharos Lighthouse was used in the construction of the fort. Photo taken in May 2008.
Posted by Neal at 9:46 PM

Here is the link to my bird blog: http://nealsbirdblog.blogspot.ca

Please do not use any of the photos from my blog without my permission. Thanks.. Neal